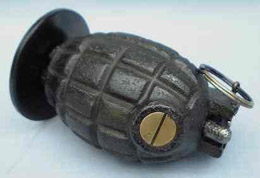 MY life should have ended in the summer of 1966 in a mess of blood spatter and body parts.

Come to that, my best friend Johnny should also have perished.

But a simple twist of fate and my father’s quick thinking saved us both.

I spent six idyllic early years of my life with my family in a spacious bungalow in the new village of Mile Oak nestled on the South Downs, near Hove. These were my growing up and playing-till-the-sun-went-down years. They were blissfully happy in their innocence and the summers were never ending. The warmth of those years will always stay with me, locked into my memories like scenes from Harper Lee’s To Kill a Mockingbird.

My mother gave me freedom to roam on the wide open hills that surrounded us, and play at soldiers, cowboys, Wild West frontier explorers or whatever fancy captured our childish imaginations.

I had three close friends at the time, the brothers Mark and Michael, and my next door neighbour, the aforementioned Johnny. We rarely played indoors and even when the weather was wet, we ventured forth either as a group or in pairs onto our natural playground. I guess in hindsight our mothers harboured few fears for our safety, as long as we were back for lunch and tea… and definitely before it got dark.

So nothing stopped us exploring a disused isolation hospital, a chalk quarry, a tumble down witch’s cottage or a former army training ground. It was real time adventure and unbridled fun for nine and ten-year-old boys.

But it was the military training ground which took Johnny’s and my fancy this warm August day in 1966.

My dad and I had discovered the site one year earlier. It was a vast area of down land once used to train soldiers during the 1st and 2nd World Wars. There was a sand-faced firing range, some dry trenches and shooting positions and acres of other terrain, still littered with rusty bullet cartridges. Most of the land had been cultivated for farming, but eagle-eyed boys and visitors could still unearth a treasure trove of old military finds.

By the time Johnny and I ventured forth on that ominous day, I had already accrued a collection of 303 rifle bullets, smaller pistol cases, machine gun shells and noses, a few old smoke bombs and three heavy artillery casings. All had been lovingly cleaned and polished with Brasso and stored in an old chest of drawers in my father’s shed.

So, with the sun on our backs, Johnny and I walked the leisurely mile to the training ground, climbing barbed wire fences and rickety five-bar wooden gates along the way.

The field before the military area had been freshly ploughed – for the first time in our childhood memories – and we chuckled with anticipation at what the newly-turned earth might reveal. There were no bullet shells (those tended to be found nearer to the firing range) but loads of heavy artillery casings and other unfamiliar iron clad artefacts, which we inspected before deciding whether to discard, hide for later, or take home.

After half an hour of searching, we were both excited by a new and very unusual discovery. We kicked the caked earth from a metal object that could have been dropped by a flying saucer. Johnny picked it up first and we both inspected it with awe. It was a grey metal oval object the size of a cricket ball with a small saucer shaped base, a handle down one side and a looped piece of wire on top. Once we had scraped away the earth, we realised it was in almost perfect condition, except for some rusting to the wire loop.

We whooped with excitement… we had found an army radio and we had to get home to clean it and make it work!

Such was our excitement, we ran back home, taking turns to carry the new find and went straight into my dad’s asbestos garage at the end of my garden.

Quickly I opened the jaws on my dad’s bench vice and gently clamped the ‘radio’ in place. Then with a can of lubricating oil and a wire brush, Johnny and I took turns cleaning the object of our affection.

After five minutes we could make out some numbers stamped onto the base. It was then that Johnny suggested we should try and extend the aerial loop at the top and look for a switch to turn the radio on. I found a pair of my dad’s pliers and began the job.

I suddenly felt the iron grip of my father as he lifted me off my feet and ran me out of the garage while simultaneously shouting in a panicked voice: “Bloody hell, what have you got here, you stupid, stupid boy!” (in actuality his expletives were a lot stronger than ‘bloody’). He threw me onto the lawn of our garden before running back into the garage to grab Johnny and repeat his rantings.

Johnny and I were both crying as my dad yelled at us to get into the house quickly and not come out until he told us. As we ran up the garden path to the kitchen door, I looked over my shoulder to see dad gingerly venture back into the garage. He wasn’t there long before joining us in the kitchen.

“I hope you realise that is a bloody hand grenade you have there in our garage!” he barked at us. “And by the looks of it you have half-taken the pin out!”

Gobsmacked, we were told to go and play in my bedroom, while dad rang 999 for the police.

Within 20 minutes two police officers arrived, chatted to my dad and to me before visiting our garage. They didn’t stay long in the asbestos building before using our telephone to call for assistance.

About two hours later, around tea-time, a khaki coloured army truck arrived and two soldiers removed the grenade from my father’s industrial vice.

Later I was told they had taken the grenade – which was indeed still live – and detonated it in a safe place.

No doubt if my father had not stepped into the garage at that precise time on that August day in 1966, I would not be writing this piece now, some 47 years later. Two young lives would have ended; it would have made a hell of a mess of my dad’s garage and with the tins of paint, petrol and paraffin stored in the building, the explosion would probably have taken out half of our street.

Note: The old military training ground was later fenced off and cleared of any remaining dangerous hardware. Johnny and I were banned from ever visiting it again.