TWO days on and I am still finding it hard to come to terms with the death of Pete Seeger.
Okay the old buffer was 94 years-old, and his passing was surely imminent; but like Nelson Mandela of a similar vintage, his death is more than sad.
He touched countless lives singing for unions, children and presidents and ordinary working people.
He turned a Bible verse and an African chant into hit records, travelled with Woody Guthrie and Lead Belly and championed Bob Dylan.
He also adapted a gospel song to sing for union workers and created a timeless anthem for civil rights with We Shall Overcome.
As a singer and songwriter, Seeger led the re-emergence of folksong performance during the 1950s and was a key figure in the folk revival in the 1960s.
A multitude of artists recorded and performed his work across six decades, including Bruce Springsteen, Joan Baez and Peter, Paul and Mary.
He recorded more than 100 albums himself.
But above all, Seeger, blacklisted in the mid-1950s at the height of McCarthyism, was a radical and a true leader of dissent against what is/was wrong in our world.
Seeger made his first recordings in New York in 1940 with the Almanac Singers and the group recorded popular anti-war ballads.
But war is war, and Seeger was drafted into the US Army and was drafted to the Pacific in 1942. The following year he married his lifelong sweetheart Toshi Ohta.
In 1948, together with Lee Hays and other veterans of the Almanacs, Seeger formed the Weavers.
They quickly became one of the most successful musical acts in America.
But then came the anti-communist blacklist.
The Weavers were banned from radio and television.
As the US wide paranoia grew and with their scheduled appearances and commercial recording contracts cancelled, the group dissolved in 1953.
In the 1960s came the folk revival, and later the folk-rock boom caught up with him. Covers of songs he wrote or recorded became global hits.
The newer generation of more commercial musicians owed him a deep debt: Peter, Paul and Mary regarded themselves as the Weavers’ successors, and singers from Joan Baez and Judy Collins to Joni Mitchell, Arlo Guthrie and Bob Dylan have all paid tribute to him.
The 2005 Martin Scorsese documentary No Direction Home contains insight from Seeger, Bob Dylan and others into that legacy.
Seeger’s political activity increased after his blacklisting in the 1960s, with the challenges to liberalism and the division of the US over the Vietnam War.
Despite musical progression, Seeger remained a favourite at demonstrations, teach-ins and sing-outs of all kinds for the next 40 years.
He continued to adapt to changing situations and political issues.
In 1969 he launched the sloop Clearwater in the Hudson, beginning a 30 year campaign to clean the river, which was close to his home in Peekskill, New York, and to publicise the ecology movement.
Over the past few years he spoke out strongly against US involvement in Iraq and Afghanistan.
Through all this, Seeger endured and performed steadily.
During the inauguration weekend for Barack Obama in 2009, Seeger, on stage with Springsteen, delivered a rousing version of the Woody Guthrie favourite This Land Is Your Land.
It was an extraordinary moment in American life with the singer-rebel at the very centre.
But it was also steeped in deep irony, as like Bob Dylan before him at Bill Clinton’s inauguration Blue Jeans Bash in 1993, here was the leader of counter-culture hand in hand with the leader of the corporate world he so deeply distrusted.
And the similarities don’t end there.
At his death we have a world tangled up in blue, a world gone wrong, a world in the grip of greedy bankers, corrupt politicians, wall to wall pornography, war mongers and global murderers, a police state set fast in imposed capitalist ethics.
Pete passed on the folk protest movement baton to Bob Dylan and Joan Baez at the Newport Folk Festival in 1964 as the ‘younger generation’.
Bob may have dropped that baton a few times and the music has moved on, but others such as Billy Bragg, Michelle Shocked, Ani DiFranco, Tom Robinson and Paul Weller have picked it up and tried to carry it.
But with Pete’s passing we lack a global leader… a living spirit of musical protest.
Even my own hero Bob Dylan is almost 73, and his political candle never burned as brightly as Pete’s.
Something is missing… or more poignantly, someone is missing.
We need the oxygen of a new leader to help us learn how to think and question this insane world we live in.
We live in a corporate world begging for the individual to make a difference.
Music and true word can do that.
RIP Pete… never forgotten

Christine Hamilton and Boris Becker
THIS brief encounter is a tale of two blondes and a missing book token!
It is April 2005 and I am a guest of Radio Five Live at the BBC Television Centre. I have been invited down to London for the day after being voted Five Live’s Football Fan of the Year for 2004 (a story for another blog maybe!).
It is late morning and I am due to appear for a five minute slot at the end of Victoria Derbyshire’s radio show – Victoria and her producer Ian Shoesmith had organised the Football Fan of the Year poll three months earlier.
Ian has briefed me about my short interview on the show – about the costs of inland rail and air travel – and I am waiting outside the recording studio for my turn.
The studio door opens and a tall and very familiar blonde man brushes past me, says ‘excuse me’ and smiles. It is three times Wimbledon champion and TV commentator Boris Becker. He is smartly dressed in a sharp suit and, having completed his piece for Victoria’s show is rushing off to his next appointment.
Behind Boris an equally familiar blonde-haired figure has entered the studio to be interviewed by Victoria. She is instantly recognisable as Christine Hamilton, the wife of former disgraced ‘cash for questions’ Tory MP Neil Hamilton. By 2005, Christine had reinvented herself as a TV personality in her own right. In 2002 she appeared in series one of the gross reality TV show I’m a Celebrity…Get Me Out of Here! and in 2004 as a panelist on Loose Women.
In real life she has the same air and swagger of arrogance so often captured in her TV moments on Have I Got News for You.
Her slot on Victoria’s show lasts about eight minutes. Leaving, she brushes past me without any acknowledgement before her PA leads her away.
I am on next… I am quietly ushered into the studio and sit diagonally opposite Ms Derbyshire.
The interview is brief and our exchange is light and full of good humour.
Before we close, Victoria asks me live on air whether I have enjoyed my visit to Television Centre and whether I received the £50 book token as part of my prize for being Football Fan of the Year.
I tell her I have had a fabulous time and without a second thought add: “I think Christine Hamilton has left the book token in a brown envelope outside the studio”. There is a muffled guffaw as the show closes.
NOTE: Nine years on and the book token has still not arrived. Neil and Christine Hamilton are both now prominent members of UKIP.

When you gonna wake up and strengthen the things that remain?. 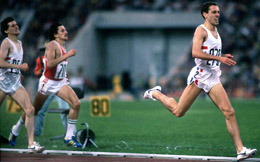 Born in time
But out of line
I never knew where I was heading
Childhood games
Along dusty lanes
Beach combed pebbles I was treading
Dark wood pain
Scarred my brain
My own faint shadow I was dreading
Back from hell
A witch’s spell
Another chance at life I was begging
Ripped right through
Who is who?
Years and happiness I was shredding
Hand in hand
And nothing planned
Grey clothed future at our wedding

No Time to Think