DAVID Bowie’s unexpected death from cancer at 69 on Monday has inspired many people to look more closely at his final song, Lazarus.

The track’s haunting music video was released just last week, showing Bowie hospital-bound, lying on a deathbed with his eyes bandaged, writhing around and singing about being “free just like that bluebird”.

The opening line of “Look up here, I’m in heaven” has taken on a poignant new meaning following his sad death.

As Bowie writhes around on the bed, trying to break free, another Bowie then appears, a Bowie clad in black and stood upright, a Bowie who can still pose, pout, pick up a pen and create.

Inspiration hits him and he scrawls at speed in a notebook, while the other Bowie continues to convulse.

As he writes, we see a skull sitting ominously on his writing desk, the spectre of death looming over Bowie and his final creation, before he steps backwards into a wooden wardrobe, a fitting kind of coffin for an icon of style and fashion. 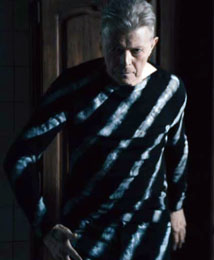 Scenes of Bowie frantically writing while clearly heavily tormented are harrowing to watch in the video, which ends with the singer retreating into a wardrobe (his closet/coffin for him and his many costumes) and closing the door behind him, seemingly bidding farewell as death finally comes for him.

The name Lazarus is commonly used in pop culture to refer to the restoration of life and there have been numerous uses of it in art and literature.

Lazarus of Bethany is the subject of one of Jesus’s most prominent miracles in the Bible’s Gospel of John. Lazarus is brought back to life four days after his burial, proving the power of Jesus over humanity’s greatest and most merciless enemy: death.

“This sickness will not end in death,” Jesus tells his followers after learning that Lazarus is ill. “No, it is for God’s glory so that God’s Son may be glorified through it. He who believes in me will live, even though he dies.”

Bowie has been a lifelong Christian. “Just Because I believe, Don’t mean I don’t think as well… Lord, I kneel and offer you my word on a wing” he sang on his 1975 Station to Station album.

And who could forget at the Freddie Mercury Tribute Concert in 1992 when he asks the 90,000 audience to kneel with him and recite the Lord’s Prayer.

Bowie could easily be describing himself as Lazarus, knowing that his musical legacy will transcend his death. After all, “he’s got drama, can’t be stolen, everybody knows him now”.

But in the Lazarus video there lies one huge riddle.

As Bowie steps back into the wardrobe at the end of the video, his all black costume acquires white diagonal stripes.

So what? I hear you ask.

Well the only time Bowie has worn a similar costume was for one single photo shoot in 1975 while filming for Nick Roeg’s acclaimed art house movie The Man Who Fell to Earth. 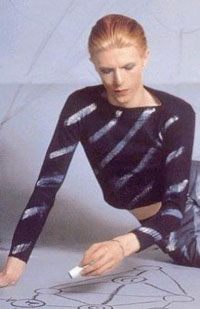 The fact that the new video was filmed towards the end of 2015 – exactly 40 years since that photo shoot maybe relevant.

But why did Bowie choose that one costume to film the end of his life?

One friend suggests that it was to show that the Man Who Fell to Earth was now ascending into Heaven… but who knows?

Anyone have any ideas?