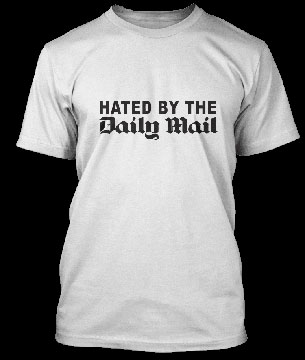 THERE are only a few things in life I really hate, and one of them is the Daily Mail.

It is a poisonous rag which cloaks itself in the clothes of middle class decency while demeaning everything which is good.

And, as a journalist, I find its pretence at factual reporting frightening.

Its so-called news reeks of innuendo and loaded propaganda.

And its agenda is unwavering: preserve Conservative Britain from the rabid threat of Marxism, the Labour Party, Comrade Corbyn, trade unions, the unemployed and working people.

There are many reasons to despise the Daily Mail… its casual attitude towards the truth which it pretends to be both seeking; the way that minorities are ridiculed and blamed; how it randomly chooses which causes to back and which to dump; the way in which “outsiders”, such as recent immigrants are demonised and its gutter trawling for so-called “dirt” on anyone who stands in its way.

My own dealings with the Mail as a journalist were rather more obscure.

I was at the pinnacle of my career working as the Chief Investigative Reporter for The Scotsman.

A whole world away from the Daily Mail.

In three years, I had broken a series of major exclusive investigations. Among the highlights were the dumping of millions of tons of munitions in the Irish Sea, the deadly legacy of the Dounreay experimental nuclear plant in Northern Scotland and a probable link between pesticides and BSE.

I had also been honoured with two back-to-back awards as Scottish Journalist of the Year and was in line for a third.

I loved my job and the collegiate atmosphere I worked in. I honestly believed I would spend the rest of my working life at North Bridge, with no aspirations other than to continue in my role.

But all that changed when in December 1996, our newspaper was surprisingly bought out by property billionaires and close friends of Margaret Thatcher: the Barclay Brothers.

With the new owners came a new Editor-in-Chief, the infamous Andrew Neil.

There was a corporate intake of breath as we all wondered for the future.

That intake turned into something approaching choking when our much loved editor, Jim Seaton, was placed on ‘gardening leave’ awaiting early retirement and a new editor Martin Clarke was announced.

We all winced… Clarke had trained under Paul Dacre at the Daily Mail and he was well known as a Rottweiler in the newsroom.

Clarke’s editorial demeanour attracted a range of tributes from former colleagues: “vile”, “offensive”, “appalling”, “obsessive”, “childlike” and “foul-mouthed” being among the less flattering.

Like Dacre, whose briefings were called “the vagina monologues” for their reliance on one particular expletive, Clarke went one better.

“He would start by saying, ‘You’re all a fucking disgrace and one of you is going to be fucking sacked this week,” and the terrible thing was, one of us usually was,” said Alexandra Blair, The Times educational correspondent, who worked for him for a year and a half at The Scotsman.

Another reporter who worked under Clarke said: “He once said to me: ‘You’ve got to go and shout at the bastards or they won’t respect you.'”

My stay under Clarke’s editorship was brief… just six months.

I moved on after being told to follow his own loaded agenda, which included one weird instruction to prove that wild deer being pursued by hounds are “no more stressed than a cow in a slaughterhouse”!

The final straw came in a bleak week, which began by Clarke blanking me at a press awards lunch after I had been highly commended as reporter of the year and finished by him standing over me at 10pm on a fourth rewrite of a story, berating my journalism as “fucking bollocks”.

I introduce a clipping of a piece written by Rob Brown in June 1997.

“Senior writers and sub-editors now find themselves being showered with expletives by their new editor Martin Clarke, whose lexicon of abuse is fairly extensive.

“Several executives have resigned in disgust. They included the picture editor Paul Dodds, who quit after being ordered to get better pictures from his “f***in’ monkeys”.

“Also out is associate editor Lesley Riddoch, who suddenly found her articles being repeatedly spiked.

“One of the journalists who has quit in disgust said: “I have worked for some brutal editors in my time, but Martin Clarke behaves like a feudal squire and treats his staff like serfs. Change was certainly needed at The Scotsman, but not this. He is running amok, creating a totally demoralised and demotivated staff.”

“But, put it to Clarke that he is pursuing a monstrous form of macho management and he professes his innocence with almost schoolboyish sense of hurt.

“Clarke, 32, says the complaints are emanating from only a couple of “malcontents”. Some people, he says, are driven by “personal pique because they never got a job they wanted”. Nic Outterside, head of the paper’s investigative unit, left last week. Clarke says the unit was disbanded because it was “a crock of shit”.

“Others, according to Clarke, have become “malcontents” simply because they cannot stand the new pace in the newsroom.

“I demand a greater level of working than perhaps some people are used to here and I can be robust at times, like all editors,” he says.

“Clarke confirms that he drew up a five-and-a-half page document a few weeks after he took charge recommending that a number of senior Scotsman staffers should be removed from their posts. This “operation review” leaked from the editor’s office into the newsroom, where it was seen as a sinister hit list. Clarke admits to some regrets about that.

“Of course it was bloody unfortunate, but you don’t expect to work in a place where such illegal activities take place. It was stolen from my computer. I’ve worked in some pretty rough newspapers, but nowhere where people are that underhand.”

At the time of writing this blog, Clarke is tipped to succeed Paul Dacre as the next editor of the Daily Mail.

And the art of being underhand is surely what the Mail is all about.

One thought on “Into the gutter with the Daily Mail”