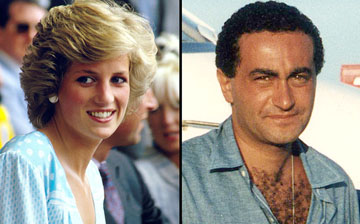 IT was a wet February in 1997 and I was ensconced in a four star hotel in Islington, tasked with bringing home what could be the biggest newspaper story of the decade.

My job as Chief Investigative Reporter for the Scottish national daily The Scotsman was to gather information from Harrods owner, Mohamed Al Fayed, about an alleged conspiracy involving his business rival Tiny Rowland and a senior Conservative government minister.

It was an enjoyable and wholly productive three days of interviews with the gregarious and at times incomprehensible Mr Al Fayed, his PA Michael Cole and head of security John MacNamara – a former Scotland Yard senior detective.

The daily routine was purposeful: breakfast at my hotel, a taxi ride across London to Knightsbridge, an escalator to Mr Al Fayed’s office on the fifth floor of the Harrods department store, a coffee and croissant with Michael Cole and up to three hours of talking, questioning and sifting through reams of documents and photographs.

On Wednesday 12 February, I arrived as usual at 10am in the reception area outside the office and boardroom.

I was greeted cheerily as usual by Mr Cole. But on this morning he asked me if I minded waiting in an ante-room for half an hour as his boss was expecting a personal visit from Princess Diana.

I was shown into the room and given the usual coffee and croissant plus copies of the day’s national newspapers to browse at my leisure.

After 10 minutes waiting, I suddenly needed a quick loo break so quietly made my way to the now familiar private washroom.

Upon my return to my isolated coffee and partly eaten croissant, I stopped suddenly as the most recognisable woman in the world walked by, accompanied by Mr Cole and an as yet unknown young Middle Eastern man.

Diana turned briefly and smiled at me.

It was a memorable brief encounter.

But a tragic event some six and a half months later undoubtedly made it more memorable.

Later that day, I caught my return train to Edinburgh and The Scotsman offices at North Bridge.

Upon my arrival I was introduced to our new editor Martin Clarke, who had taken up his position while I was away in London.

My first meeting with him was also memorable, but for very different reasons.

I was brusquely told that our investigation into the conspiracy surrounding Tiny Rowland had been spiked for ‘political reasons’. I was also told I was ‘wasting my and the newspaper’s time’, not to ask any more questions and to ‘get on with some proper reporting’.

The months passed and on 31 August 1997, two events coincided: it was my final day working for The Scotsman and ironically Princess Diana, 36,  her lover (Mohamed Al Fayed’s son) Dodi Fayed, 42, and driver Henri Paul were killed in a horror car crash in the Pont de l’Alma road tunnel in Paris.

My reaction to the deaths at the time was the same as it is now: they were murdered.

But it was only 10 years later at a judicial inquest, following a three year inquiry into their deaths and possible murder, that my own brief encounter came back to haunt me.

The inquest, under Lord Justice Scott Baker, heard on at least six occasions that at the time of his romance with Diana in the summer of 1997, Dodi Fayed was engaged to an American model, Kelly Fisher. Dodi had bought a house in Malibu for Fisher and himself with money from his father.

The inquiry also heard heart surgeon Hasnat Khan give his first detailed account of his two-year relationship with Diana, during which he says he often stayed at Kensington Palace and met the princess’s sons.

He described how the princess broke up with him after she got back from a holiday with Mohammed Al Fayed and his family.

The inquest dismissed reports that Dodi and Diana were in a relationship prior to that summer and therefore any talk of an impending engagement in August 1997 – and possible motive for their murder – were subsequently rubbished.

Something I knew then and now to be untrue.

The Inquest jury returned a majority verdict that Princess Diana and Dodi Al Fayed were unlawfully killed due to the gross negligence of their driver, Henri Paul, and the paparazzi.

But I am still left with the haunting question: if that was the case, what were Diana and Dodi doing making a personal visit to Mohamed Al Fayed on 12 February 1997?

Mr Al Fayed later claimed that a plot to kill Diana was kicked into high gear as soon as British authorities found out from the CIA that Dodi had picked out a $215,000 star-shaped diamond ring for his future bride.

“The only reason my son and Diana were in Paris that night was so that he could personally collect the ring and propose to her,” he said.

“I spoke to Dodi and he was so excited and happy. Diana was too. They deserved a lifetime’s love together, and this beautiful ring was to put a seal on that,” he added.

“Diana believed all her married life that she was under surveillance by British and foreign intelligence agencies who reported back to her husband Prince Charles and the British establishment,” said Laurie Mayer, Mr Al Fayed’s press spokesman.

“She had every reason to think they intercepted her phone calls. The call she made to Lucia on the afternoon of her death could have alerted them she really was going to marry Dodi and that he, a practising Muslim and the son of a man who helped bring down the British government, would be stepfather to Prince William and Prince Harry.”

Mr Al Fayed also wanted – and got – files on two photographers, a Frenchman and a Dutchman.

“These men know what went on that evening,” said John McNamara.

“They filmed the motorbike we know was blocking the exit road, forcing the Mercedes to take the tunnel. That could show the license plate of that bike and another one we believe shot into the tunnel behind the white Fiat Uno.

“The Fiat Uno was waiting at the mouth of the tunnel. There was a collision and since then the bikes and the Fiat have vanished.

“Immediately after the crash, the photographers sent their pictures round the world. Some of those wired to an agency in North London had vital frames showing the vehicles we cannot now trace.

“The agency was broken into just hours after the crash and neither we, nor the police, believe it was an ordinary burglary.

“Many photographs show Diana lying in the rear seat of the Mercedes, one arm flung across Dodi and her legs buckled up under, have been seen across the world. Some have even been published in Europe. But none has shown the bikes or the car.”

Just one of far too many unanswered questions over the death of the People’s Princess.