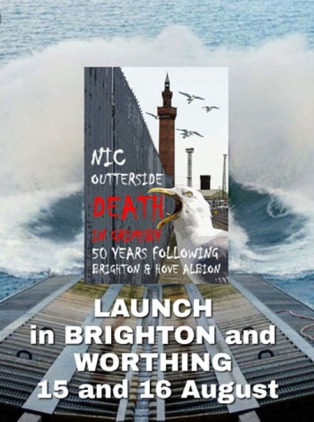 A NEW autobiographical best-selling football paperback is set for a formal launch at two Sussex venues this summer in front of surprise special guests.

Death in Grimsby – 50 Years Following Brighton & Hove Albion was written, edited and published by soccer fanatic Nic Outterside, and given a soft launch in May among friends and fellow Albion fans.

Already it is a best seller around the world, including sales in Australia, Scotland, Spain, Germany, Italy, San Francisco and California.

Death in Grimsby currently stands at Number 2 in the Amazon Football Reference sales chart, at Number 3 in Amazon’s Football Hot New Releases and also at Number 3 in their Most Wished For chart.

The book’s formal launch, with personal signings and special guests, including former Brighton & Hove Albion legends, will take place at two venues in Brighton and Worthing on the eve of the Albion’s first home game of the 2019/20 season against West Ham on 17 August.

Death in Grimsby charts Nic’s passion for his far from ordinary home town club for more than half a century. Among 50,000 words and 115 images it is a collection of personal stories which will resonate with every football supporter, no matter which club they may follow.

“I have been following Brighton & Hove Albion since I was a very small kid, and like a fan of any club, whether that be Arsenal, Accrington Stanley, Aston Villa or Alloa Athletic, once you are hooked you are well and truly hooked,” explains Nic.

“It is a passion which has never dimmed with greying hair, crows’ feet etched lines and a free bus pass just three years away.

“I am now pinching myself that not only has my book sold so unexpectedly well, but I will now meet some of the players that feature in it and who I cheered for from the North Stand all those years ago,” he adds.

Death in Grimsby is a collection of short stories which charts the first 50 years that Nic supported his beloved Albion, starting with that first game at the Goldstone in 1967 and finishing with a match against Wolves at Molineux in April 2017, when his club all but mathematically secured promotion to the promised land of the Premier League.

Each chapter is a separate story related to 21 different matches and events, including Nic’s first night game against Portsmouth in 1969, a record 8-2 defeat against Bristol Rovers in 1973, winning promotion to the old League Division One in 1979, an FA Cup Final in 1983, Football League survival against Hereford United in 1997 and much more.

These are knitted together with many personal recollections such as meeting Ernie Wise in Leeds, trying to explain the Foot and Mouth Disease funeral pyres to his young daughters before a match against Carlisle United in 2001, interviewing the England legend Paul Gascoigne, bribing match stewards with slices of home-made flapjack at Birmingham City and being hospitalised with hypothermia after a game at Grimsby.

A Kindle e-book edition of the book is also available for £3.99 at: