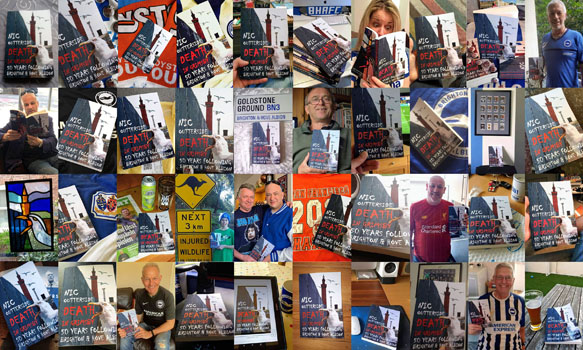 A NEW best-selling football paperback has scored again with a raft of FIVE STAR reviews.

Death in Grimsby – 50 Years Following Brighton & Hove Albion was written, edited and published by soccer fan Nic Outterside, and given a soft launch in May among friends and fellow Albion fans.

Already it is a best seller around the world, including sales in Australia, Scotland, Spain, Germany, Italy, San Francisco and California and stands at Number 2 in the Amazon Football Reference sales chart.

Now it has been further boosted with more than 20 top rated reviews from early purchasers of the book.

These are a small sample:

A wonderful read that brilliantly encapsulates the raw emotional highs and lows experienced by the majority of football fans passionately dedicated to their chosen team.

You don’t have to be a fan of Brighton & Hove Albion to enjoy this book. The tales of Nic’s journey will resonate with fans of every club. Brilliant stuff.

An enjoyable insight into the trials and tribulations we go through to follow the club we love, that all football fans will be able to relate to.

Death in Grimsby is a great read for football supporters. Fans of any club will relate to the passion of the author for his beloved team. But it is also part social history and part memoir of the author’s life, told through his experiences of travelling and following Brighton. A quick and entertaining read, highly recommended.

You can’t help but fall in love with this book – a true work of love written by someone who bleeds blue and white, funny, honest and full of nostalgia – takes pride of place among the rest.

Absolutely brilliant – a must-read for all Albion fans, in fact, for all football fans.

As a lifelong Brighton & Hove Albion supporter I thoroughly enjoyed this book – the memories came flooding back. My other half is a non-Brighton fan and he thought it was brilliant also and very well written. I would recommend it to anyone who has any interest in football.

What a fantastic read! Brought back so many memories and tears supporting Brighton & Hove Albion.

An excellent read which highlights the pain of having to watch your team from afar due to circumstances out of your control. I thought I was alone but this book confirms I was not. A brilliant book for any fan of any club exiled from their homelands.

A great book, fantastic read, evokes so many memories.

An awesome read. In some ways reminiscent of Nick Varley’s Park Life, but much more immediate and in places very humorous. The experiences and emotions relayed in this book will resonate with every football supporter, no matter who you support.

You don’t have to be a follower of Brighton & Hove Albion to read this book. It is full of interesting stories and information about different clubs that maybe not everyone has been to. Really enjoyable read.

Death in Grimsby charts Nic’s passion for his far from ordinary home town club for more than half a century. It is a collection of personal stories which will resonate with every football supporter, no matter which club they may follow.

Each chapter is a separate story related to 21 different matches and events, including Nic’s first night game against Portsmouth in 1969, a record 8-2 defeat against Bristol Rovers in 1973, winning promotion to the old League Division One in 1979, an FA Cup Final in 1983, Football League survival against Hereford United in 1997 and much more.

A clearly delighted Nic said: “I hoped my story might resonate with supporters of most football clubs, but to reach number 2 in the sales charts and to have so many top reviews is beyond my wildest dreams.”

The formal launch of Death in Grimsby with personal signings and special guests will take place at two venues in Brighton and Worthing on the eve of the Albion’s first home game of the 2019/20 season against West Ham on 17 August.

A Kindle e-book edition of the book is also available for £3.99 at: