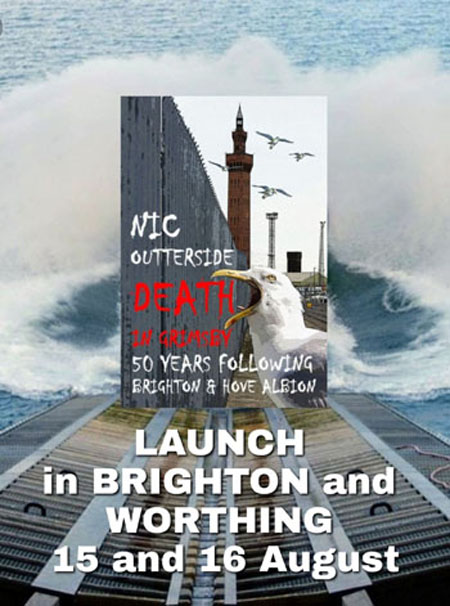 PAST and present legends of Brighton and Hove Albion have given personal endorsements to a new best-selling book Death in Grimsby – 50 Years Following Brighton & Hove on the eve of its launch this week.

The book, which chronicles Albion fan Nic Outterside’s 50 years supporting his beloved home town team is set for a double-headed launch in Brighton and Worthing on Thursday and Friday (15th & 16th August).

The book has already made hundreds of sales in Australia, Scotland, Spain, Germany, Wales, Italy, Canada and the USA, as well here back at home in England.

Death in Grimsby currently stands at Number 2 in the Amazon Football Reference sales chart and at Number 3 in their Most Wished For chart.

Death in Grimsby is dedicated to Nic’s own Albion hero Kit Napier – the club’s leading post war goal scorer, until recently overtaken by Glenn Murray – who sadly died just a few weeks before the book was published. Kit’s two sons Robin and Chris, who live in South Africa, have sent their own good wishes for the publication’s success.

Now Nic has received a personal email from the Albion’s former owner and chairman Dick Knight who wrote: “I’ve started it and a very interesting read it is… I hope it all goes well and the book is a big success!”

He then received a letter from current owner and chairman Tony Bloom who wrote: “It’s great to have someone with such a long history supporting our club, and it’s wonderful that you’ve been able to document it in this book.”

Nic said: “I am overcome with the support I have received for this book. I never expected this reaction when I set out to write Death in Grimsby last October.

“To get support from former players, who as a small child I watched as Albion heroes, is breath-taking and to then get personal praise from the two men who saved our club from extinction and moulded it into the Premier League giant of today is mind-blowing. I am so grateful.

“But for me the thing which leaves a huge lump in my throat is to have made good friends with the two sons of Kit Napier – my first and forever sporting hero.”

The book’s formal launch, with personal signings and special guests, will take place at two venues in Brighton and Worthing on the eve of the Albion’s first home game of the 2019/20 season against West Ham next weekend.