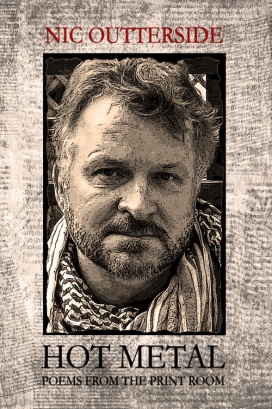 SEVEN years after suffering a career ending nervous breakdown, an award-winning journalist-turned-author has now published his tenth paperback as a Kindle e-book.

The book Hot Metal – Poems from the Print Room draws its genesis and inspiration from his years in the newspaper and magazine industry.

He began the slow road to recovery under the watchful eyes of his doctor and the support of his family. Part of the suggested therapy was for him to begin writing and talking about his life experiences.

His first paperback book The Hill – Songs and Poems of Darkness and Light, published in November 2014, was met with international acclaim and the first 1,000 print edition has almost sold out.

In 2018, he published its sequel Another Hill – Songs and Poems of Love and Theft.

In between time he also found time to write and publish a slim volume of poems in homage to the songs of his favourite album Blood on the Tracks by Bob Dylan.

Then at the helm of his own publishing house Time is an Ocean, Nic started editing other people’s books, including a magnum opus Asian Voices and a widely acclaimed Luminance – Words for a World Gone Wrong.

Now, while completing a huge book of investigative journalism tales (to be published later this spring), Nic has returned to poetry with his new book: Hot Metal – Poems from the Print Room.

He explains its genesis: “In 1993, during my early years in newspaper journalism we would take time out every Thursday afternoon after that week’s paper hit the presses.

“I was chief reporter of an editorial team responsible for putting together the news, sport and features for one of Scotland’s most highly regarded county newspapers: The Galloway Gazette.

“This was our two hour sojourn before we began planning the following week’s edition. It was a time to escape from “Cow Halts Traffic on A75”, “Young Mum Guilty of Shoplifting at Woolworths” and similar stories to find solace and creativity in my self-centred pastime of poetry.

“So I would sit, with a mug of coffee in my hand and scribble some ideas, a few lines, and if I was particularly creative maybe a whole poem. The poems would never be read by anyone else… it was my secret hobby.

“Then by the end of last year, I suddenly realised I had more than enough poems to fill yet another book!

“They reflect the real me that has emerged seven years on from that breakdown and 27 years since those first doodles on a Thursday afternoon at the Galloway Gazette.

“The book is a litany of love, loss and angst fermented with the ideas that swam around my head all those years ago.”

I. McMahon
Me and My Anatomy
Fissured Reveries

An attempt to bring together my scrambled thoughts.