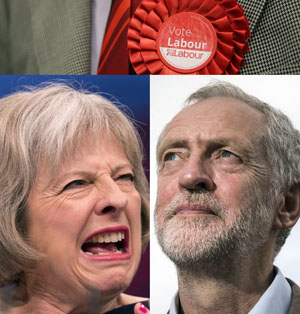 NEXT month’s General Election is a pivotal moment and will change our country for a generation and beyond.

The choice is simple.

We have the “strong and unstable” Tories who are hell bent on turning our country into a Little Britain for the powerful and rich and let the devil take the hindmost for the rest of us.

Or we have a Jeremy Corbyn led Labour government dedicated to serving and helping the “many and not the few”.

If we, the electorate make the wrong choice, I fear deeply for our collective futures.

For decades our country has been sleep walking into a world of personal greed, arrogance and self-importance with totems such as million pound homes, winner takes all, designer clothes labels and reverence to the aristocracy.

Human kindness, gentleness, peace, society and social justice were jettisoned for a winner takes all mentality and a scapegoating of the homeless, those claiming benefits, the disabled, Muslims, asylum seekers and the poor in general.

Once again, the choice is simple.

We must not again elect a UK government compiled of self-seeking rich Tory elitists who care more about their mansions and banking friends than about people.

And their shopping list for change is truly terrifying.

Over the next few years an unshackled Theresa May Conservative government will:

But under Jeremy Corbyn, Labour is offering a real and radical alternative which gives renewed hope of a better future.

Over the past two years this gentle political firebrand has packed out meetings and hustings the length and breadth of this country with his simple messages of fairness, compassion and change

His messages have caught the hearts and minds of millions.

Now those messages are wrapped up in Labour’s pledges for this General Election and will be spelt out fully in the party’s manifesto, which will be launched next week.

Jeremy Corbyn’s 10 Pledges to Rebuild and Transform Britain are quite simply breath-taking and wonderful:

Fairness, compassion and equality can finally overturn the scourge of capitalist greed.

The choice is simple: vote Labour.