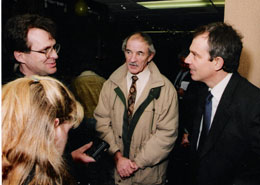 YOU usually only get the true measure of a person when you meet them face to face.
And so it was for me when I first interviewed erstwhile Prime Minister Tony Blair, soon after his election victory in 1997.
I had briefly met Mr Blair two years earlier in Glasgow while he was celebrating Labour’s landslide wins in the local council elections. He was triumphant, beaming and pressing flesh in every direction. The Scottish faithful loved him.
I had helped elect him and his Labour Government on 1 May 1997, thus ending 18 years of Thatcherism and Majorism and the class-ridden Tory ruination of our country.
Like millions of others I was now hopeful for a brighter and more socially equal future… after all, things could only get better!
So when, in early December I was asked by my news editor at the Sunday Sun (a North of England Sunday tabloid, not to be confused with the rag the Sun on Sunday!) if I would like to interview the new Prime Minister on his return to his Sedgefield constituency, I jumped at the chance.
On a sunny Saturday morning, armed with a hand-held tape recorder and full of questions I made my way to the Labour Club in Trimdon in County Durham.
The club was full with the local faithful and many more had gathered outside. Here was the return of the conquering hero.
Looking tall in a dark suit, white shirt and equally dark blue tie, Mr Blair addressed the audience inside the club about his hopes and plans for a New Labour Britain. It was typical political rhetoric, the type I had heard many times from other party leaders. But Blair was convincing and comfortable in the knowledge that he was among friends.
He finished to a standing ovation and began to mingle with party activists.
I approached his agent John Burton and requested a few minutes of the PM’s time for an interview which I could guarantee we would run the next day.
Ten minutes later John tapped me on the shoulder and told me Mr Blair was ready for ‘a chat’.
So I faced our new leader, introduced myself and asked him about his proposed cuts in benefits to lone parents. He noticeably winced at this first question, and in words which would not be alien to David Cameron, he said: “I think most people understand that we have got to reform the system. Because if you are spending more on benefits than you are on schools, hospitals and law and order put together, there is a problem.”
Asked if stalwarts in his constituency shared many fellow Labour MPs’ fears over benefit cuts, he became slightly more agitated.
He said: “Look, I have always said that whenever you are doing change then it is always difficult to begin with. We have got to make these reforms and I think people will accept them as changes we have to make.”
Then in words which could have come straight from Conservative Central Office he gave a stark indication that the disabled and sick would be the next to face an overhaul of their benefits.
“We spend more on disabled and incapacity benefits than we do on the entire school system in the UK,” he told me, before adding: “Benefit fraud – estimated at £4 to £5 billion a year – is enough to build 100 large hospitals.
“If we achieve these reforms then it will be a magnificent legacy that the New Labour Government has left us in a new millennium.”
We talked for another ten minutes before the Prime Minister moved away to the safety of his constituency friends.
This was my political watershed. Personally I felt my interview with Mr Blair was enlightening for many reasons.
Primarily because during the course of the conversation, Mr Blair avoided any eye contact and instead looked right through me, as if reading from an auto cue.
Secondly, because these were not the words, or message to the poorest in our society, that I was expecting from a new Labour Prime Minister. A Prime Minister charged with turning back almost two decades of Conservative pillage and division.
And finally, when all else failed, Mr Blair seemed to rely on cheap soundbites and a pre-learned script.
There was not one ounce of sincerity in anything he said.
He had lost me!
And over the next four years, the actions and policies of Mr Blair’s New Labour Government confirmed my worst fears.
While I still voted Labour in the June 2001 General Election, I had lost all confidence in this light blue successor to Thatcher or any dreams of a more socially fair country.
The events of post 9/11, Mr Blair’s unswerving support of the moronic George W Bush, the illegal invasion of Afghanistan and the lies over the justification for war against Saddam Hussein and Iraq, finally nailed it.
I felt that like many, I had been caught in a web of lies and propaganda and lost in a smokescreen of rhetoric and deceit.
The poor were poorer, the rich got richer, and the innocent victims of Blair’s wars lay charred and dead.
So by 2005, for the first time in my life I did NOT vote for any party or political leader.
That was nine years ago. Now sadly, just two weeks after the sad death of one true democratic socialist Tony Benn, I am still casting around for something and someone to believe in.
The fight for peace, social justice and the protection of the poorest and most vulnerable in our society must continue, but I don’t believe one of our major political parties now has the will to do that.